Nothing beats the anticipation of a plate of freshly made raviolis with ricotta cheese or meat filling!

Raviolis are just one of the classic Italian filled pastas that you should attempt to master!

I just look at that picture and fear comes into my mind, the fear that my brother will get more than me!  We all waited for the call to the table!

There were so many Raviolis on the bed that we had to hang up our coats! The kitchen filled with family all catching up on what's new with who and sharing stories of past times.

The aroma of a pot of Gravy cooking on the stove, fresh basil growing in the window in tomato cans and the faint hint of gas from an old space heater in the kitchen.

The table was set with a mix match of glasses plastic, metal and cut crystal. The table was covered in special linen and the kids table in newspaper! Homemade Wine on the table in gallons!

It is amazing how food can conjure such imagery! I can just taste them now! 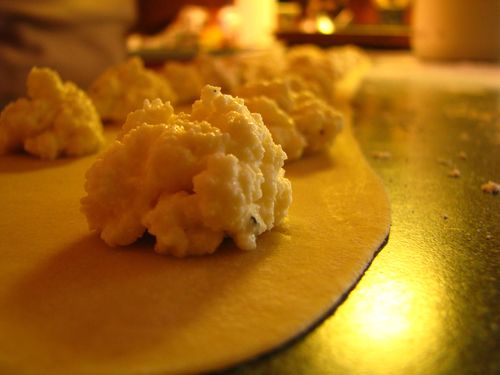 The most important thing about this recipe is the selection you make when buying the Ricotta cheese.

Find a Ricotta that is not bound up with lots of starches or gums to tie up moisture.  The Ricotta should be whole milk and drained properly in a colander in the refrigerator, overnight if possible.  Important to also note that you must use flat Italian parsley  not the curly kind as well as good quality Imported Parmesan and Romano.

Use this recipe for your Ravioli, Manicotti and Lasagna filling. Also great to stuff chicken breasts with! 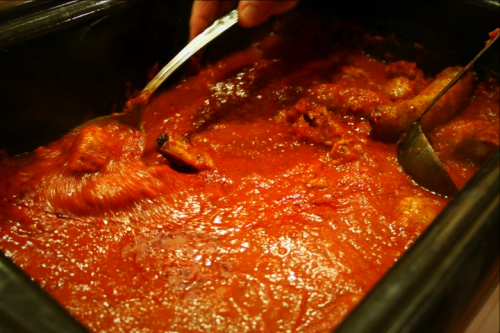 As I was searching for for Pastiera Napoletana. I came across this great piece written by Carla Passino, http://www.italymag.co.uk

-"The first thing that strikes you about Pastiera Napoletana is its scent. It’s like smelling a bouquet of orange flowers. Indeed orange flower water and orange peel go into this pie, which has a crisp golden crust and a soft, creamy filling of ricotta, sugar, eggs and cooked wheat, flavoured with cinnamon and vanilla.

It is so heavenly that legend wants it to be the creation of a siren, Partenope, protectress of Naples, who concocted it from the food offerings the populace brought her every spring. The cake, Neapolitans say, was the only thing that was sweeter than the siren’s voice.

Another story gives Pastiera Napoletana equally sacred but more modern origins—it is said that a nun of a Neapolitan convent first made it to celebrate Easter, and tried to capture in the recipe the scents of Spring blooming in the cloister garden. Indeed, Pastiera was long the preserve of nunneries, which excelled at making the cake.

Today, it is made at home, usually on Maundy Thursday or Good Friday, so that the flavors have time to blend and steep before the Easter banquet.

Recipe from the Italian Culinary Institute in New York City

*Vegetable shortening can replace lard, but lard is the traditional ingrediient in this Neapolitan specialty and adds to the pie's distinctive taste.

In a mixing bowl, cut the lard into the flour until fine crumbs form.

Make a well in the center. Add 5 yolks.

Bring the dough together by pulling and pressing, avoiding excess kneading. Wrap in plastic wrap and refrigerate until chilled.

Roll out the dough and line the pan. Dough should fold over the edge of the pie pan.

Reserve leftover frolla to cut 3/4 inch strips for the top of the pie.

Note: Frolla made with lard is very fragile. We rolled to a little thicker than 1/8 inch within an envelope of wax paper, then removed the top layer of wax paper and flipped the frolla into the pie pan. Frolla dough can be refrigerated overnight.

Crumble the ricotta and place into a mixing bowl.

Fold in sugar well by hand.

Let stand overnight in the refrigerator; Return to room temperature for mixing into the filling.

Some recipes call for straining the ricogtta before adding it.  this is not necessary.

Recipe is a combination of one taught at Italian Culinary Institute and a traditional recipe from Chef Guido Magnuagno.

Directions:
Drain water from the grain.

Cook until grain is somewhat softer and larger, or about 25 to 30 minutes.

Drain the water. Place the wheat and all other ingredients back in the saucepan and add milk. (If the grain is salty, add reserved lemon juice.) Stir vigorously for another 10 minutes or until the mixture is creamy (not sticky), and the grain is al dente.

Remove and place into a mixing bowl.

Recipe is a combination of Italian Culinary Institute's recipe and a traditional one.

*Yolks result in a dense pie; if you wish to have a lighter consistency, replace them with 2 egg whites. Whip separately and add 2 tbs. sugar right before they peak. Fold in at the end, after the wheat has been added to the filling, and just before emptying the filling into the frolla.

Roll out reserved dough to a greater thickness than crust (more than 1/8 inch) in an envelope of wax paper. Remove the top sheet of wax paper and cut four strips about 3/4 inch wide. (Less experienced bakers may wish to cut more than four strips so that if a strip tears in the middle of the pie, it can be picked out of the filling and quickly replaced with another.)

Brush yolk and water mixture over the frolla around the edges of the pie pan.

Spoon filling into the pie pan.

Replace the wax paper over the strips of frolla so that only one strip is exposed at one time. Flip the strip diagonally over the filling carefully securing  the strip at each edge of the pie. Repeat to create a lattice design.

Brush yolk and water mixture over the strips.

Place pie in oven pre-heated to 375 degrees. Bake for 15 minutes. Lower oven to 325 degrees and cook for another 50 minutes or until a toothpick comes out clean.

Cool and then refrigerate la pastiera for an hour or more before dusting it generously with confectioner's sugar. Pie should be refrigerated. It will stay fresh for four or five days.