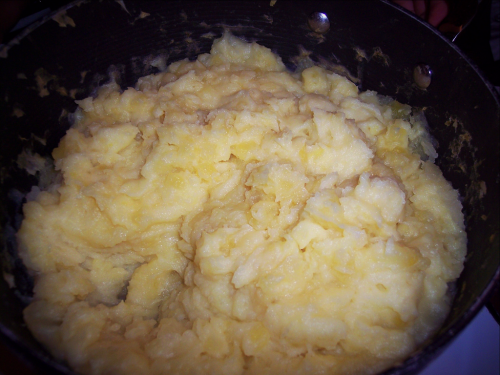 Chef Russel Bry  taught me how to make the best Mashed Potatoes when I worked for him at the Eccentric, in Chicago.

Here is my adaptation of what he taught me.  Roasted Garlic Mashed Potatoes are a great accompaniment with Roasted and Grilled Beef, Seafood and Foul!

The secret is not to be afraid of butter and heavy cream.  Taste the Mashed Potatoes to be sure there is enough butter flavor as well as seasoning.

Be sure to mash your Potatoes when they are hot.  Try this recipe either peeled or with the Potato skins left on.  Once you master the basic Mashed Potatoes you can have fun by incorporating your favorite fresh herbs like Dill or Basil you may even substitute the Garlic with Wasabi or Horseradish .

Serve your Mashed Potatoes with Natural Pan Drippings, your favorite Gravy, Melted Butter, Olive Oil or grated Parmesan Cheese.  There is also a recipe for Truffled Mashed Potatoes as well which may be found here!

Not enough garlic flavor? Try a combination of fresh chopped and Roasted Garlic. 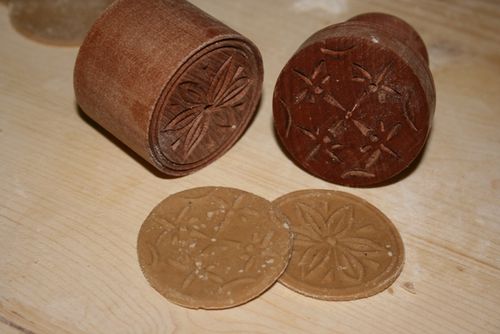 For many of us Pasta Types are the basic types that you find in the grocers.

Spaghetti, Penne, Linguine, Lasagna and  Rigatoni plus some soup Pastas.  The reality is that there are so many Pastas Types volumes can be written about them!

Some are specialized for a particular style of sauce and others are fanciful creations like the Ligurian specialty Corzetti which is shaped and stamped in the form of ancient coins.

Cook-Italian.com!  Has presented recipes for Fresh Semolina Pasta and Ricotta Cheese Gnocchi .  Today I will cover just a few of the dry Pasta Types that are out there.

The names may be different from what you know or there may be some that are missing that are your favorites.  If so, I would love to know so please leave a comment and share!

Dried Pasta is simply created with flour and water.  Some types of Pastas have egg, as in Parparadelle egg noodles. Other Pastas are infused with spices, vegetables and even squid ink!

Authentic Imported Italian Pasta legally can only be made with Durham Flour or Durham Semolina.  If dried pasta is made with other than Durham flour it will be a softer style Pasta lacking the desired bite when cooked ("al dente" to the touch of the tooth). You will also see pastas made with Buckwheat, Whole Wheat as well as the growing in popularity Gluten Free Pasta.

The origin of pasta can be traced back to the Greeks and is mentioned in Muslim and Christian writings alike.

Contrary to belief, China was not the origin of pasta but rather derived from Arabs who conquered Sicily in the late 7th century.   Marco Polo's travels were used by food industries as PR to get people in the United States to eat Pasta. See Wikipedia or lifeinitaly.com for more history.

When cooking Pasta I use lots of salted boiling water.  I don't add olive oil to my Pasta water, I feel it adds no value.  I boil my Pasta (what ever shape it is) to the point where if I bite it gives resistance to my teeth but is not crunchy.  The interior of the Pasta will have a slightly under-cooked appearance and texture.

Once finished I drain the Pasta immediately but never rinse it.  In then toss the Pasta with a bit of olive oil, only enough to coat the Pasta and prevent it from sticking.  This procedure is great for cooking Pasta ahead of time and reheating it when needed either in sauce or in boiling water to bring it back to temperature.

The classic method is to drain the Pasta reserving about a cup of water in the pot and adding that to your sauce.

The water adds back water due to evaporation in cooking as well as adds body to your pasta due to the starch in the pasta water. (as in this recipe Shrimp Fra Diavolo)

As far as what sauces to use with what Pastas there are a few rules.  Pasta recipes that call out the shape should be respected as in Spaghetti Arrabiata http://realyrome.com.

This guide to the most popular pasta shapes that follows is courtesy of the National Pasta Association. www.ILovePasta.org. 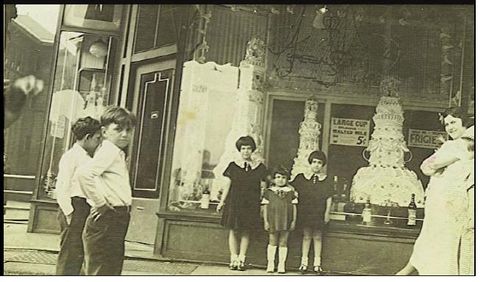 Location was in the Taylor street neighborhood, Grand Avenue.  A young Andrea Salara is seen here completing the finishing touch on a wedding cake that was said at the time to be a record holder for the tallest wedding cake.  When I was living with my grandmother she gave me this photo as a gift, to this day it hangs in my home. I believe that the photo is more than of 75 years old.  It is mounted on 1/4 inch plywood in a wooden frame that has been painted at least 5 times. 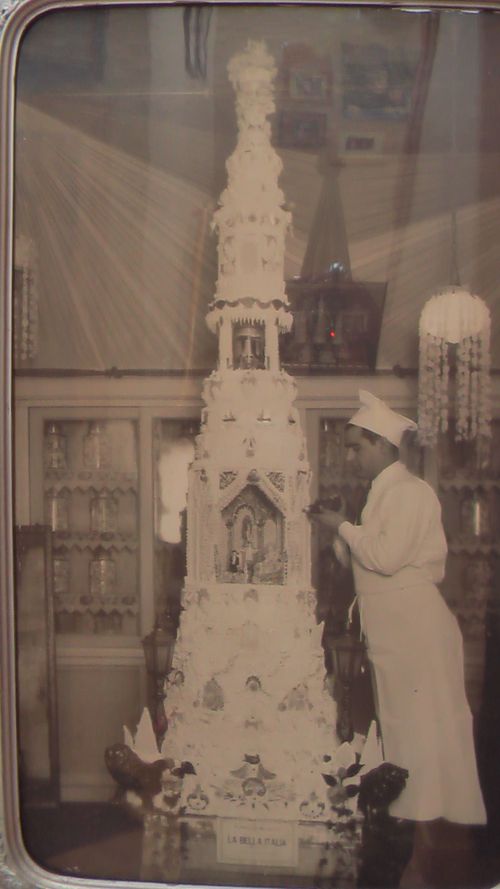 I have no Idea how he got the top of the cake up there.  I do know that back in the day you could not buy the decorations that today we take for granted.  Each one of the trellises were created by piping icing over coffee cans cut in half or on foil cut outs.  Once dry they were put in place. Think of the time it may took!

Posted at 07:44 AM in Vintage Italian Family Photos | Permalink | Comments (4) 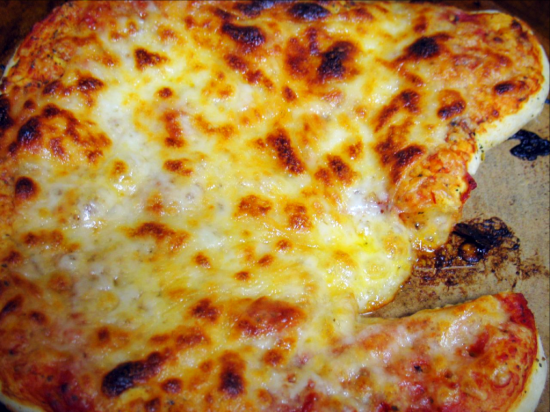 Nothing that I ever made at home is as well received as when I am making pizza!

Don't deny yourself the great taste of a homemade pizza made with fresh quality ingredients.

It doesn’t matter how round your pizza is or if it’s in a pan, thin, thick, traditional or with exotic ingredients! The pizza was made by you, your family and guests will appreciate it! So make some pizza today!

If you've never made pizza before it can be intimating, what if I mess up? I never did it before? forget it I'll just order out!  Trust me, it's worth the time and effort! Making Pizza at home is one of the most rewarding culinary tasks.

All anticipate when the pizza will be ready, take a sneak taste of the cheese and ingredients ,savoring the aroma as it permeates through the kitchen!

For me, it is most rewarding when I see the face of my children when the pizza comes out of the oven! It's a family event where all participate.

I roll out the dough; the kids add their sauce and toppings (of course I have to make sure they don’t go crazy with the sauce and ingredients).

When the pizza is topped, I man the oven baking each one at a time on a preheated oven stone.

I also like pan style, fantastic for a fried crust bottom and a foccacia pizza taste.

Pizza in a pan is a must for those who love the Sicilian Pizza where it it’s simply topped with herbs, tomatoes, Parmesan cheese, and olive oil.  This was my Mother, Anna Marie's favorite who loved it also with slivers of onions on top. Making Sicilian Pizza is great for the all day pizza graze!  I’ll make a few and just leave them on the counter and we whittle away on them thru the day!

Are you inspired to give it a try?  Great!