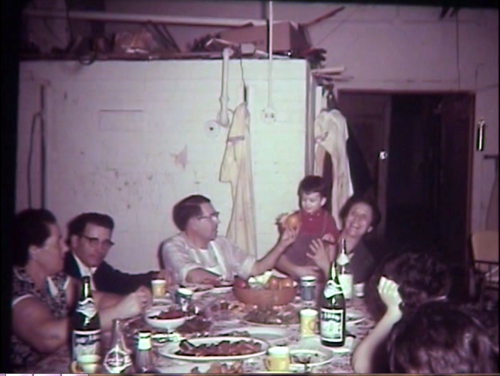 Our Grandparents and Parents who immigrated, worked hard to provide for their families and to give their children a brighter future!

In this photo we see my grandparents enjoying a meal.  My mother may be the one preparing the food and my father taking the picture, I can only imagine.

The location is my grandfathers bakery in Chicago.  My grandfather still has his apron on. The structure behind him looks like the walk-in refrigerator. What are they eating?  It could be some kid of "pop" on the table, some Italian sliced meats, perhaps a bowl of gravy meats as well?

I do notice a bowl of Roma tomatoes on the table for the fresh made salad harvested from the garden which they all had!  What do you notice? 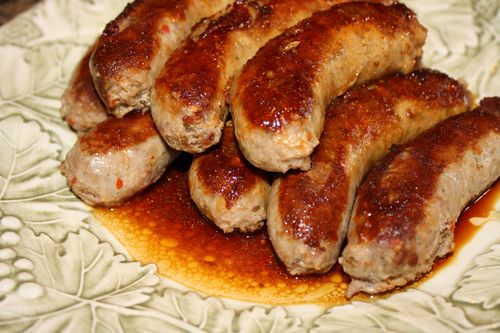 Flashback:  My first memory of Italian Sausage was eating it as a child. As far as someone making it, it was my father.  One day he walked into the kitchen with these stringy things that looked like rubber bands.

He pulled out this machine and began to hook it up to the counter, not plug in but crank like the pasta machine.

He then proceeded to take a package of meat that he must have purchased from our local butcher Huppy and Leo's.  I watched as he seasoned the meat with garlic and some other stuff.  Suddenly it start smelling like Italian Sausage.  The aroma of the fennel and garlic gave it away!

He then took these rubber band looking things and placed one end over the spigot of the faucet and let water run through them. They began looking like those balloons they twisted at the carnival to make a poodle! Then I realized he used these to hold the sausage filling.

He cranked and ground the meat, seasoned it, tasted it raw (what is that wrong?), then adjusted seasoning.  He then slipped on the balloon things on a horn which was now on the grinder.  He then cranked out these big long snakes of sausage, I remember thinking how cool it looked!

That Saturday my father cooked his homemade Italian Sausage on the grill in front of our restaurant "Jim's Snack Shop" for the Fiesta Days Celebration in McHenry Illinois.

The memory of the aroma of  charcoal briquettes with the fat of the sausage flaring on the grill to this day is still in my mind.  Combined with fresh roasted sweet bell peppers and some giardinara and of course crusty yet soft in the center Italian bread and you were in Heaven! 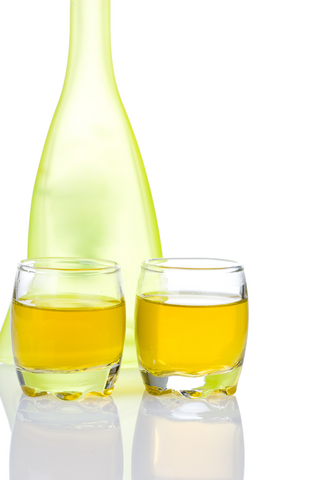 My first experience with Limoncello was not in Italy but in the states.  I was visiting a friend in Wisconsin and he had some homemade Limoncello in the freezer.

He offered me a small glass of this thick syrupy lemon liquor that was reminiscent of lemon drop candy!  It was great and it called to me to drink more. :-) I'm not sure how much  I drank but it sure went down smooth!

We were also treated to Limoncello  with the owner of the Italian restaurant that I visited during a trip to Rome, Hostaria Dino and Tony!  Since then I have enjoyed it on occasion while dinning out as a nice finish to a meal!

This is a wonderful recipe I have found. Additionally there is a great recipe in, Giuiliano Bugialli's  Foods of Naples and Campania!

Limoncello is from southern Italy, around the Gulf of Naples and the coast of Amalfi, it may also be found in Sicily and on Sardinia. It is made from lemon rinds, alcohol, water, and sugar. In other recipes the lemons are suspended in cheesecloth over the grain alcohol (Everclear) and held in suspension for a month or so.  After it has is time the lemon are removed and the mix is sweetened and bottled.

Limoncello is found all over Italy, I have seen it now and then in Italian restaurants that cater to the customer who appreciates authentic Italian food!

Remember the homemade version has a real kick but is wonderful to make and enjoy with your guests.  Plus you have boasting rights that you made it yourself! 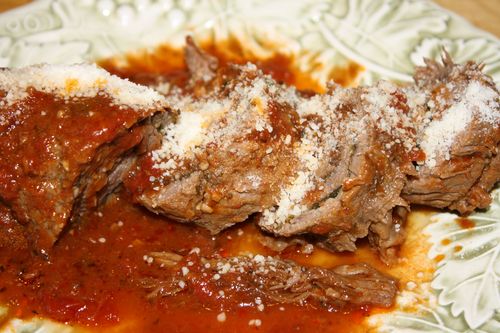 Here is a recipe that should ring true for all Italians and lovers of home cooked Italian food!

is simply thin sliced beef, pork, chicken or veal which has been pounded, filled tied or picked and braised.  It is then simmered in a tomato sauce until it is very tender.

Braciole is easy and may be made ahead of time.  The version I have here is a simple one which is rolled with garlic, Italian parsley and grated cheeses. Once you master this recipe you may get creative and try some other versions filled with slices of prosciutto, provolone, hard cooked eggs and more!   I have enjoyed ones filled with pine nuts and raisins as well.

When ever I see Braciole on a menu I always order it!