I found this on the Italian Sons and Daughters of America Facebook post and just had to share it with you!  Don't wait till someone gets married to get your fix of Cannoli Cake!  I can't wait to make it myself! 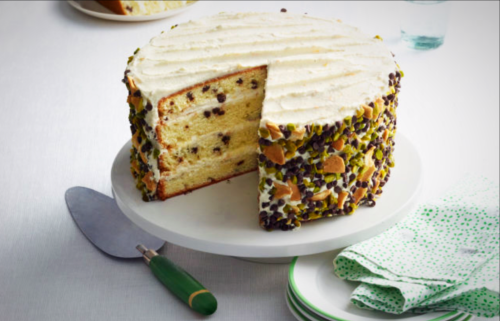 The following recipe, created by The Casserole Queens, appears on WomansDay.com.

My Friend Chef Jason Dowd and I made a Porchetta Roast in the test kitchen one day after talking about it for a week. I watched as he rubbed the meat down with a blend of seasonings that included fennel pollen

. Here is a great video from LuckyPeachTV that shows how Italy's Best Porchetta is Made.

"Vito's Norcineria was established a century ago or so in Marino, a small town a few kilometers south of Rome. There, he makes a mix of classic salumi, sausages, and prosciuttos, along with some more esoteric stuff that has grown out of his obsessive desire to research and perfect his craft: coppa di testa without testa, Arnad-style lard, and three kinds of salumi made from three different breeds of local pigs (some of whom are raised for him by an acquaintance who regularly blood-tests the animals to confirm the purity of their pedigree)."

Of course you could go to you local butcher and ask them for a pork loin roast with belly attached make sure the skin is on as well. The skin becomes like pork cracklings and is delicious!

Here is a recipe from Forking Tasty that seems easy to follow!

with an Caper and Parsley Aioli. Here is a recipe from Kelsey Nixson, Food Network.

I've been following Visit Naples on Facebook lately and love watching the videos. It is such a beautiful area!  I often wonder what the food was like when my Grandfather lived there and how he adapted his favorites using the American ingredients.  If you have been to Naples Italy

let me know how the food was!  Here is a video about some of the top street foods.  Is there anything missing?

Upload images to posts in Category