This version is one with cream.  The classic Carbonara is made with egg, pancetta and Parmesan.  You may substitute red pepper flakes if you like instead of the black pepper.

If your not into the pancetta then try using a great smoked bacon.  Some recipes I came across use sweet peas as well.  Not classic but still great.  Click on the image and it will take your to another site Sunset which has the cream free version. 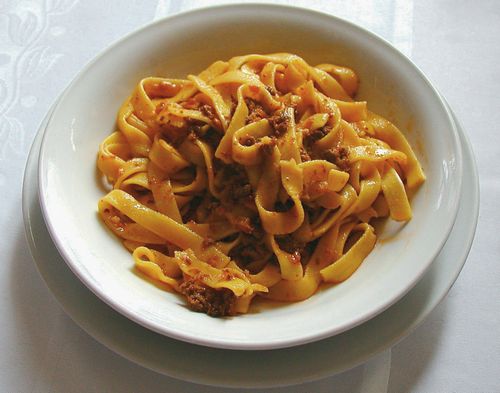 I have to omit that growing up I had no clue what Bolognese sauce was!

It makes sense since my family’s origin was from the Naples region.  The main difference between Naples and Bologna's version is how the meats in the sauce are used as well as the amount of tomato in the sauce.

The Bolognese version uses very finely chopped or ground meat while our family’s version uses meats like Pork, Braciole made with flank steak Sausages and Meatballs.  With the flavor marrying into the sauce and the meats served on the side.

In my sauce I replace white wine with a red wine, and use lard or olive oil, and lots of fresh basil leaves.  It seemed weird to me to add milk or cream to a "gravy" only exposed to this later in my cooking career. With that said I never really had the opportunity to have a real Bolognese sauce!

In all the restaurants our family went to the menu would say Spaghetti alla Bolognese.  I would get it and be hugely disappointed thinking that these guys don’t know how to cook, but that’s the way it is made most of the time in America not like we Naples style at home!   In Bologna you will find that this is served with  tagliatelle,  a fresh egg pasta.

The Naples version would be mostly served with Spaghetti, Bucatini, and Ziti.

My friend David swears to Marcella Hazans version from "The Classic Italian Cookbook" and says he leaves it cooking for at least 5 hours!